“Under this mask, another mask.

I will never be finished removing all these faces.”

Cahun and Wearing by Gillian Wearing, 2017. (Image from ArtJobs.Com)

Within “Behind the mask, Another mask”, an exhibition curated by Gillian Wearing for the National Portrait Gallery, Wearing places her work alongside Cahun’s in a comparative (or parasitic - depending on your perspective) manner. The first image you’re faced with is a large print of a well known self portrait of Claude Cahun, only there’s something extra uncanny about the image. The eyes seem too sunken, the crispness of the print quality itself disconcertingly digital, and then your eyes are drawn to notice the mask in Cahun's hand. Isn’t that Gillian Wearing’s face? That’s when the nausea sets in. 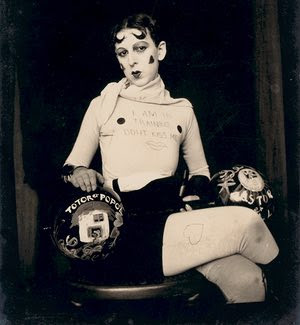 Within "Behind the mask, Another mask", Gillian Wearing creates a body of work in which she appropriates other people’s identities, subsequently replacing their individuality and spiritual presence through the insertion of her own eyes. Wearing peers out at you from behind immaculately crafted masks of her subject's faces. There’s an echo of “The Talented Mr.Ripley” to this work, her eyes gazing out of the iconographic cadavers of those who came before her, or perversely those who she is most personally close to in her own life (for example various incarnations of herself at different stages of life and of members of her family). In an ironically literal interpretation of her last name, she’s “Wearing” other people’s identities like a second skin.

Wearing uses the aesthetics of narcissism as her medium, and a featured collection of work in the exhibition, “My Polaroid Years, 1988-2005”, appears like a prophetic forecast of how social media encourages it’s users to curate “profiles” of themselves. The day by day archiving of our spiritual and lived experiences into 2D self portraits has become a daily routine, and as an emerging generation we take pleasure in the reduction of ourselves into these hollow pictures of how we want to be seen by others. By disassociating ourselves (through constantly documenting our lives through images), we alienate the connection we have to time passing and our relationships to others through our narcissistic projections, and Gillian Wearing is the one of the great perpetrators of this trend. (Bar, maybe, the Comtesse de Castiglione’s impressive collection of selfies circa 1800s).

Me As Mapplethorpe, 2009. (Image from the Guardian)

For me, the most questionable piece of hers was her self portrait “Me As Mapplethorpe, 2009". The plaque beside the image read (paraphrased), “In this image, I really wanted to channel Robert Mapplethorpe’s fear as he was dying of aids”. Wearing wore Mapplethorpe’s "fear of death in the face of a aids" as though it were an instagram filter, and in this warped approach to honouring Mapplethorpe's bravery, she comes across as severely lacking any empathy or respect for his reality or his human experience. This work becomes a gesture of spiritual impersonation and an experimentation in spiritual reproducibility, and for these reasons I feel the work has very sinister undertones. By reducing the layered depth and complexity of people down to mere costumes, masks and spectral images, you negate and deny the very essence of the person. To inhabit the shell of a cultural icon such as Robert Mapplethorpe, who championed photography as a visceral and authentic way of concretising and shaping his own world, to have his spirit “worn” in such a way is almost taboo.

Pictured: Gillian taking Kate Middleton on a tour around her exhibition. (Picture from Vogue)

On an even more personally opinionated note, to me Gillian Wearing represents the role of the “Corporate Cannibal” (a term coined by Grace Jones). She turns the surface of the people she impersonates into skin outfits, and then displays the final images as "art" to be purchased and consumed by the upper classes.

In my personal research, I have been looking into the ways we as humans (specifically western, capitalist and patriarchal societies) continue to dissociate ourselves from physical communities in favour of more individualistic and narcissistic methods of structuring society. We also rely on digital technologies to control and mediate time as it passes through the mediating lenses of our cameras. I came across an article that discusses a term coined by a Native Amazonian tribe, the Karamakate. For me, the term “Chullachaqui” describes Gillian Wearing’s portraits and subsequently expresses the intention of what she’s communicating through her images. The film, "Embrace of the Serpent" (2015) explores the position native people were put in with the very first arrival of european anthropologists alongside the invasion of western companies that maim the rainforests and tribespeople within their own environment.

Nilbio Torres in Embrace of the Serpent, 2015. (Photo by Andrés Córdoba / Courtesy of Oscilloscope Laboratories)

“One concept the film explores is the legend of the “Chullachaqui” or “Chullachaki”, a mythological figure that looks like a copy of a human being and waits in the jungle with the intent to deceive. When young Karamakate (Nilbio Torres) sees a picture of himself, shot by ailing German ethnologist Theo (Jan Bijvoet), he believes that his photographic image is his Chullachaqui. When Theo looks at him in confusion, Karamakate explains that everyone has a Chullachaqui, which looks exactly like the person but is empty and hollow, a copy that drifts like a ghost.”

Wearing's work is symptomatic of a type of end-phase colonialist attitude of boundaryless appropriation (Postmodern..?) and self-entitlement within her portraits. I'd say her role as an artist exists within a larger colonial structure (England) which has a history of stealing and suppressing from other countries. But for Gillain, she inhabits and possesses other people’s experiences, instead of literally culturally appropriating from specific nationalities. Wearing appropriates the spirits of western cultural figures, along with her own family relatives. Whether she has the critical intention to criticise this colonial impulse through her portraits, or whether she sincerely embodies it, I can’t discern. In my personal opinion she should push this further and make her criticism evident in the work. The murkiness in her intentions behind these works, for me, is the most disturbing aspect of them, and her position of catering to the capitalist art world by making these perverse portraits to be purchased just seems twisted to me- to steal another person's identity, insert yourself into their eyes, display that work and then sell it to the highest bidder so that direct monetary rewards come from this act of sinister stealing.

Antonio Bolívar Salvador in Embrace of the Serpent, 2015, ( Photo by Andres Barrientos / Courtesy of Oscilloscope Laboratories)

There is a further passage from the article on the "Chullachaqui" that puts words to what I think our colonialist (white) culture has developed from: “When the second explorer, Evan (Brionne Davis), arrives in 1940, the older Karamakate (Antonio Bolívar Salvador) now believes that he has lost his true self and become his Chullachaqui. Unable to remember many of his tribe's basic rituals, the shaman feels like a shell of his former self, lacking the important knowledge, dreams and connection to nature that once animated him. He notes that the rocks, mountains and nature used to speak to him, but he has lost this hearing. “The line is broken,” he says. “The memories are gone. Rocks, trees, animals, they all went silent." I feel that through our mediating use of analogue and subsequent digital technologies, we have removed ourselves from the connections to one another that make us human and ground us in reality (defined by the physical). We’ve identified with the machine and with the superficial, we’ve idolized the sleek and consumerist selfie presentations of ourselves, and we’re addicted to these things because we feel we can have control over the unpredictability of our lives, and receive "rewards" from the society when we mindlessly echo it's demands back to it. At the root of Wearing’s work is an impulse of narcissistic reflection and display. She exhibits a belief that she is everyone and everyone is her.

Claude Cahun, Self portrait (in cupboard), c. 1932 (Image from Another Mag)
Self-portrait (with Nazi badge between teeth), 1945. (Image from the Gaurdian)

Inversely to Wearing’s hellish-hall-of-mirrors work, Claude Cahun made the focus and content of her work inextricable from her spirit. Cahun never appears to lose her sense of self despite the alchemical transformations of her identity within her self portraits. She swung like a pendulum between genders, presenting multiple and surreal incarnations of herself, while always remaining authentic in the way she presents herself and in the personality that is communicated through the images. The power of Cahun’s work is that she frees the spirit from the limitations of the surface, of the face or body (without negating or denying the body- she transforms her appearance in collaboration with her body). Through her surrealist work she defies categorization. I find the comparison of the two artists to be a huge and incomparable reach. To place Wearing, who creates portraits that violate people’s right to their own identities, next to Cahun, who liberates the self from continuity and turns herself into a surrealist dream, is a misplaced combination from Wearing. Had the overall tone of the show been focused more about a conversation Gillian was having with the work of Cahun, maybe it would've had room to open up interesting combinations, but the idea that Cahun and Wearing are equals in their visions is misguided. On a personal level, Cahun's very reality deserves more recognition and respect than was provided within this exhibition. Cahun survived the second world war while being a lesbian and a jew, she continuously made her life’s body of work from an authentic perspective in collaboration with her life-long partner, which is all very unlike Wearing’s privileged experience of profiting from the YBA movement after 1990s Britain. Another comparison made within the show was between Cahun's piece, Self-portrait (on sea wall), 1949, and Wearing's performance, Dancing in Peckham, 1994,. The curation of this section of the show appears to compare Cahun's photographic sequential celebration of the Nazi defeat (through her dancing upon a german fortification in her own garden) to Wearing's uncomfortable dancing performance piece filmed within a mall.. Authenticity where? How can such a profound piece of work such as Cahun's be compared to a piece so tepid as if they correspond to each other?

Cahun was an explorer of feminist ideas before feminism became a cohesive movement, using photography to deconstruct archetypes of gender and self presentation. She remains a fundamental member of Surrealist movement, and her images retain their modernity (more so than some of Wearing’s work does due to the developments in convincing latex masks and digital technologies).

Despite my lengthy criticisms, I will give Wearing credit for creating work that is successfully so unnerving. The degree to which she conveys disembodiment within her images is haunting to the point of causing existential discomfort when confronted with large-scale prints of her work. She forces herself into the bodies of history and collapses those histories into this role of narcissism, this annihilation of the other in favour of the self.

PETE AND REPEAT; Incantering OR “The True Artist Helps The World by Revealing Mystic Truths”

Review: Feminist Avant-Garde of the 1970s